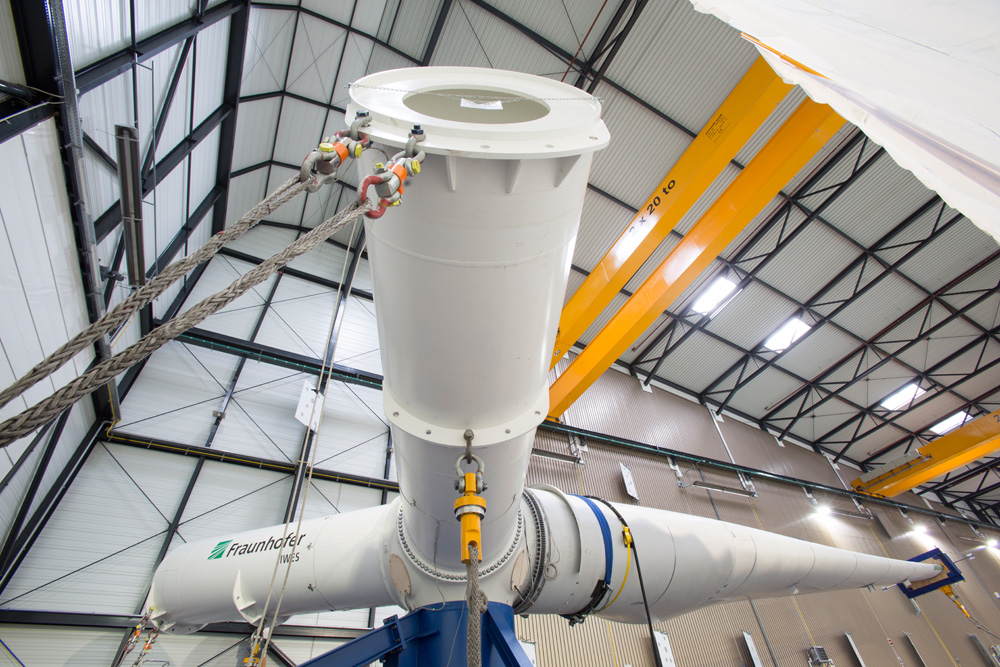 The rotor blade bearings of wind turbines are subject to unfavorable operating conditions. They have to accommodate high bending moments while standing still or rotating at very low speeds. The surrounding parts, especially the rotor blade, provide limited stiffness. It is not possible to apply typical standards for calculating the service life of bearings, such as ISO 281, and the experience-based construction of bearings is reaching its limits due to new bearing designs and operating modes such as Individual Pitch Control (IPC). The damage mechanisms in the bearing depend on a range of factors, which, in turn, have differing effects depending on the actual bearing and lubricant.

In such situations, the safe use of blade bearings in the turbine can only be ensured through highly realistic testing. To this end, Fraunhofer IWES, in cooperation with Senvion GmbH, has developed a blade bearing test stand which enables testing of the entire hub/blade bearing/ rotor blade group. In this set-up, all the significant interfaces are modelled realistically. A maximum bending moment of 15 MNm can be created on the rotor blade; this moment can be divided into flapwise and edgewise bending. Additional load arms on the free blade bearing flanges ensure realistic deformation of the hub flange on the blade bearing. Pitch movements with amplitudes of up to 5° can be realized when subject to loading. The test stand has 400 measurement channels and can also accommodate high-frequency systems for monitoring vibrations and lubricant film thickness.

The Fraunhofer IWES’ testing strategy is essentially divided into functional and fatigue testing. During functional testing, the dominant damage mechanisms in the bearing are determined. These damage mechanisms define the program for subsequent timeaccelerated endurance testing. Fraunhofer IWES also handles the set-up of the test program, taking the time series of the load simulation as the basis.

A comprehensive data analysis permits the acceleration/compression of the testing period to times which are acceptable within the framework of wind turbine development.

Availability to other customers The test stand, without the additional parts from Senvion GmbH, is also available for public use. The test stand can be used directly to test the hub/blade bearing/rotor blade assemblies; Fraunhofer IWES can also arrange the production of the corresponding components for testing individual bearings.

Matthias Stammler
Fraunhofer IWES
This email address is being protected from spambots. You need JavaScript enabled to view it.