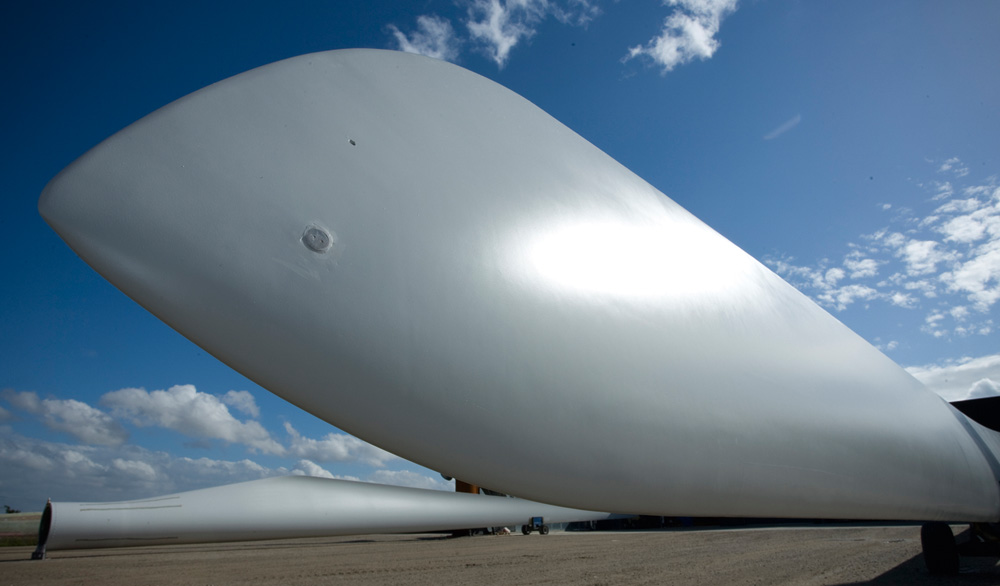 Research Alliance partners regularly join forces to handle complex research projects since the combination of core competencies allows a wide range of topic to be covered. The Smart Blades project is presented below as an example of such fruitful cooperation.
Expanding Germany‘s wind power sector presents a range of technical challenges, with the main focus on the development of efficient technologies for both the high-wind offshore zones and low wind onshore sites. In both cases, the trend is towards installing increasingly large rotor blades in order to make more efficient use of the wind potential and also reduce the high maintenance costs.
Prototypes now being trialed in the field are of a new order of magnitude compared with the current installations – the new turbines boast an extra 20 meters in length. In the onshore sector, rotor diameters of 120 meters are now quite common. The scale of these installations can only be truly appreciated when set against other technical products: for example, rotor diameters that dwarf the 80-meter wing span of long-haul aircrafts sweep an area the size of several soccer fields with every rotation. 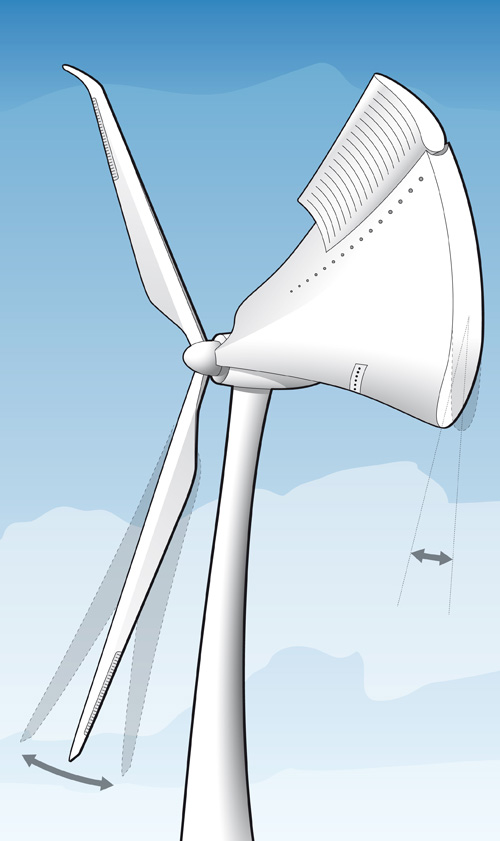 Today‘s rotor blades have now grown to as much as 85 meters in size and, because of the non-homogeneous nature of the wind distribution across the rotor surface, are subjected to hugely fluctuating loads that present a real challenge for the structure and control of the wind turbine. Innovative concepts like Smart Blades can make a significant contribution towards overcoming these new problems. These intelligent rotor blades are different in that they use various active and/or passive mechanisms to reduce their aerodynamic loads and hence the structural stresses acting on them. This means that the blades become lighter while retaining the same blade length or longer while maintaining the same blade weight. This also alters the stress loading situation of the other turbine components – and reduced loads mean that the entire system is much less susceptible to damage, which in turn can result in higher system availability and cost savings due to the reduction in weight. The research project Smart Blades will quantify just how great this potential is.
The Smart Blades research project, which is being funded by the Federal Ministry of Economic Affairs and Energy, will cost around 12 million euros and run for a period of three years. This first major project to be undertaken by the Research Alliance Wind Energy commenced in late 2012 and involves more than forty researchers working together at six different sites on the development and design of intelligent rotor blades. Three different technology approaches are being investigated along with additional cross-technology themes. As well as the development of new high-performance models – including those for aerodynamics, lightweight structures and cost-efficient production methods – concepts are also being adapted from the aviation sector for use in the wind power industry.

Two blade variants are being examined on the basis of passive technologies: one with a structural and one with a geometrical bending-torsion coupling (BTC). The project is using component tests to validate new methods and tools for both variants. Suitable control systems are also being developed for these BTC blades. The objective is to make all the computational tools needed for the numerical design of BTC rotor blades available and to put the potential of the two variants on a comparable basis. For the new rotor blades and the developed tools and methods to be validated in a rotating system, the medium-term plan is to manufacture 20 meter-long demonstration blades and to test these out on a real turbine. The project will also derive manufacturing data for these demonstration blades. The knowledge gained from calculating the 80 meter-long blades will contribute to produce an appropriate design for the 20 meter-long demonstration blades. 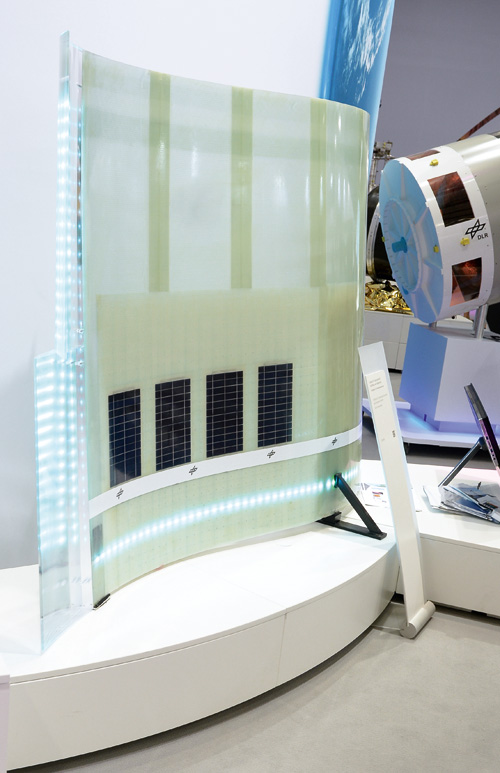 The collective pitch method previously employed to reduce structural loads has the disadvantage that the rotor blades cannot be configured over their entire length to cope with the locally heterogeneous nature of wind distribution. The same applies to installations fitted with the latest individual pitch systems. What is more, as the inertia increases the loads become ever greater and the attainable pitch speeds lower. A flexible and fast-response alternative to this is available in the form of the movable trailing edge or rigid edge flap as used in the aviation industry. By positioning the flaps (also referred to as movables) at a suitable point on the rotor blade, the loads can be individually and locally controlled on each blade.
As well as working on the methodical development of rotor blades with movables the project is also building a demonstrator for static and dynamic laboratory investigations. The latter comprises the active part of a blade section that should eventually be compatible with a vertically rotating test bench.
Looking further ahead there are also plans to build a 20-meter demonstrator which will use the data acquired from the construction and testing work on the blade segment.

The Smart Blades project is also working on the concept of an integral slat system and this is being experimentally investigated in wind tunnel tests. These will record the reaction dynamics relative to the forces acting on the wind tunnel model and identify the controllability thresholds of these forces. This is achieved by characterizing the turbulence affecting the model in the wind tunnel in order to measure changes in the aerodynamic data. There are also plans to develop an intelligent control system for the slat and to test this in the wind tunnel in a subsequent project.

Further activities are also being planned in addition to these technology developments. These include the computational modeling of a state-of-the-art reference installation fitted with 80 meter-long rotor blades that will be used to compare the different technologies and variants. At the end of the project term a detailed assessment will be made of the different methods used to identify the system‘s potential and weaknesses. The Smart Blades project will produce tangible benefits for the designers and developers of wind turbines and plant components as well as for wind farm operators: it will provide know-how, tools and resources that will bring more effective, more cost-efficient and more reliable designs on the market.