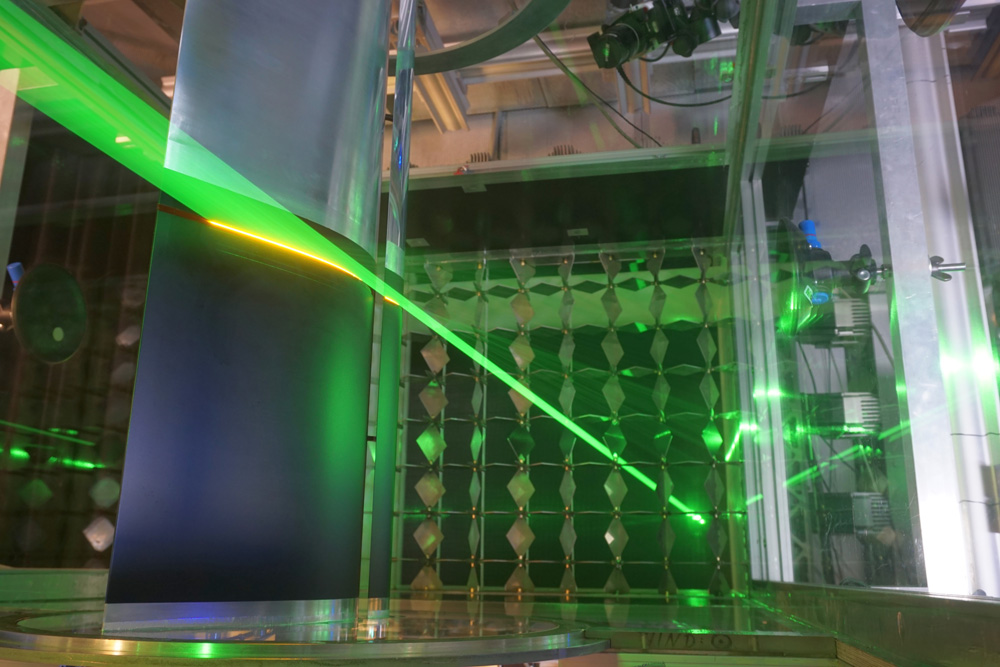 Germany has set itself the goal of eliminating nuclear power until the beginning of the 2020s. To be able to compensate for the amount of power currently coming from nuclear power plants, while remaining clean, independent and still capable of providing the population with the energy it needs, different types of technologies must be explored and further developed. To achieve this goal the country has decided to award a large amount of investments to the research and development of renewable energies and specially to wind power technologies. The main motivation for investing on the research of wind power plants lies on the fact that different and larger rotors will be necessary to satisfy future energy demands. These rotors will need to be designed with an approach distinct to currently used ones, since contemporary technologies would simply not be able to satisfy the design requirements.

Within the frame of the Smart Blades project three technologies for enabling the design and building of larger rotor blades capable of adapting themselves to variable wind conditions; of standing gust loads in diverse environments; and at the same time, capable of generating more power, while remaining light enough to be feasible, transportable and mountable, were studied. The project studied and proved the potential of using the different technologies for achieving this goal: first, blades that can couple bending and torsion, or twist, for passive morphing; and, second and third, using adaptive trailing edge flaps and leading edge slats, respectively, to influence the aerodynamic behavior of the blades, functioning in a similar way to aircraft high-lift systems.

The success of Smart Blades showed the potential of the developed technologies, increasing the interest from the industry and leading to the follow-up project: SmartBlades2. Within this project the Research Alliance Wind Energy and a consortium of industry partners are currently using their expertise to test and implement the developed concepts in a new generation of wind rotor blades.

SmartBlades2 had its kick off on September 2016. It is a project financed by the Federal Ministry for Economic Affairs and Energy from Germany and accounts with a budget of 15.4 Million Euros. More than 50 researchers and collaborators are involved in the project, covering areas ranging from structural design up to production, from the study of aerodynamic loads up to operating controllers and testing. The scientists are further developing the three technologies from Smart Blades, with the goal of building and testing the concepts in a real wind turbine in order to achieve a higher technology readiness level for the blades; thus facilitating their introduction in the industry.

The first technology, which studies the coupling of bending and torsion of the structure, aims to enable the construction of rotor blades capable of adjusting themselves to variable wind conditions in a passive manner. This means the blades can twist themselves along their span in order to achieve an optimal angle of attack, providing for example with a smaller exposed surface when strong winds are raging, allowing damage prevention while still offering a good performance.

Departing from the design for a 20 m blade that was developed during the Smart Blades project, within the SmartBlades2 project a set of blades for a complete wind turbine will be manufactured. These blades will be produced at DLR’s Center for Lightweight Production Technology (ZLP), located in Stade. Working closely together with the industry, ZLP focuses on industrial-scale production technologies, developing and manufacturing products in a cost-effective manner, in a research center equipped to handle the entire process chain for components made of fiber reinforced composites.

Following production at ZLP, one of the manufactured blades will be transported to Bremerhaven and tested there, at the test center of Fraunhofer IWES, the institute focuses on the validation of technological developments in the field of wind energy. Furthermore, IWES accelerates the market introduction of innovative products and enhances certification processes. The center offers a unique testing infrastructure, state-of-the-art laboratories and measurement equipment that allow the systematic identification and reduction of development risks. The Smart Blade that will be tested at IWES will be subject to static and dynamic certified tests, which will help examining the behavior and integrity of the blades manufactured under the new blade design.

The measurement results from both tests will be used to validate design and simulation methods developed during both the SmartBlades and the SmartBlades2 projects. The tests will also demonstrate how the new technology concepts and manufacturing methods perform. In addition, the investigations will determine the economic potential of the bend-twist smart blade concept and will lead to the achievement of a higher technology readiness level. Moreover, in order to support the industrial partners on their path towards manufacturing smart blades in mass production processes, the results will be used for enhancing both the models and the technologies, enabling the development of methods for designing larger smart blades, expanding the design potential of the smart blades systems and setting the next step towards bigger, more powerful and more efficient wind rotor blades.

The second technology investigated in the SmartBlades2 project focuses on the use of active elements, capable of modifying the trailing edges of the blades in a controlled manner, a technology inspired from aircraft high-lift devices and control surfaces. The main advantage of the new blades system is its acquired ability of changing the airfoil’s shape in a rapid manner, allowing the blades to adapt themselves to quickly and strongly varying wind conditions, such as gusts, and improving so their performance under all required circumstances.

The strategic goal of this technology is to, on the one hand, validate current results coming from simulations regarding the structural dimensioning process of the flexible trailing edge coupled with aerodynamic interactions; and, on the other hand, to further evaluate the possible implementation of active trailing edge technologies into the wind turbine system as a whole.

To achieve these goals, a blade section with a flexible trailing edge will be mounted on a spin test stand and tested under real environment conditions. The objective of this test is to proof that the concept can reach the desired aerodynamic and mechanical effects while standing loads that would be experienced under real loading conditions, such as centrifugal forces and common weather impact. This will enable the implementation of the system concept in full scale rotor blades.

The measurements resulting from the spin test bench tests will be used for the validation of simulation models that were originally used for predicting the behavior of the structure under real conditions. In addition, the aerodynamic behavior of the used model will be tested in a wind tunnel, in order to study the influence of the trailing edge deflection on the polars of the blade segment demonstrator, allowing a final validation of the aerodynamic simulation results.

To complement these mechanical engineering research areas, another part of the project regarding this technology focuses on the control of the trailing edge system. Within this topic the interaction of an IPC control system will be studied and evaluated for the overall blade with a flexible trailing edge system. The objective being to show that it is possible to control the developed trailing edge in real time in the wind tunnel tests, so that loads can be strongly reduced by using a “Hardware in the Loop” model of the active system.

Moreover, the acoustic effects of using a supplementary moving component, the flap, and of the associated gaps between the flap and the structure, will be studied and approaches for reducing eventual annoyance effects, such as increments on noise emission levels, will be developed.

The third technology deals with the impact of leading edge slats on the aerodynamic behavior of 2D profiles and of rotor blades under turbulent inflow conditions. The research work within this technology is divided in three main work packages covering three possible implementation technologies with decreasing levels of complexity, ranging from active over adaptive down to passive slats and aiming for different goals.

As a passive device, the slat shifts the angle of attack for reaching a maximum lift at even higher values, thus reducing the possibility of occurrence of flow separation. As an active and as an adaptive device, the slat regulates the gap between the profile and the slat, affecting the flow around the profile and resulting so in a different lift and drag behavior, allowing to mitigate fluctuations in the acting forces. As an application case, the active and passive slat applied along the span of the rotor blade of a wind turbine can help to achieve an optimized load distribution over the blade.

In order to systematically characterize the behavior of the three different slat concepts under turbulent wind conditions, these will be studied in detail in wind tunnel tests covering from investigations on 2D profiles for the active and adaptive solutions up to the realization of a small-scale wind turbine model with a passive slat system.

Since the active slat offers more control capabilities than the other solutions, the results from the detailed characterization in the wind tunnel will serve as a reference for the other concepts. The profile with the active slat and an open loop control scheme that was developed during the SmartBlades project will be used to develop a closed loop control. The controlled slat system will be tested under reproducible turbulent inflow conditions. Based on the results of the characterization of the active slat, an autonomous adaptive kinematic will be developed and manufactured. The purpose of this system is to positively counteract dominant fluctuations in the turbulent wind flow. The potential of this adaptive concept is to be compared for 2D profiles with that of an active slat.

The strategic goal of the third studied technology is to further develop the actively controlled slat into an autonomously working adaptive kinematic leading edge system. To do this, in addition to the pure aerodynamic efficiency, the dynamic behavior of the system will also be studied in detail and then considered within the wind turbine system development process.

The cross-technology topics or the so called fourth technology will focus on the further development of selected methods and technologies developed both during SmartBlades and during SmartBlades2; and, they will also study the possibility of expansion towards new insights for the wind turbine system as a whole. Thanks to this technology, the benefits and added value of the smart blades as well as the advantages and drawbacks of the first three technologies will be determined. Furthermore, since the focus of the fourth technology doesn’t lay on an isolated rotor blade but on the wind turbine system, a holistic view regarding economical and technical aspects will be acquired as a result of the studies.

The strategic goal of the cross-technology topics is to provide with a clear statement about the advantages and disadvantages that the introduced three technologies bring, in order to show the potential and possibilities they can offer to the industry, but also in order to define the next steps for their further development.

Within this frame, topics that were originally only studied in a secondary manner (such as the study of adhesive joints, of aeroelastic stability or of adaptive control), but that could lead to failure or strongly contribute to the system’s performance level, will be considered. Studying these topics will not only allow increasing the confidence in the developed technologies and improving the design, quality and performance of the smart blades as components and as a part of the wind turbine system; but will also increase the probability of industrial implementation.